Having just finished watching the finale moments ago, I’m starting to suspect low ratings may not be the only reason Nickelodeon chose not to air Season 4 on TV. I’ll get to that in a bit but yeah, Season 4 was released online and via iTunes and Xbox Live. LoK fans should consider themselves lucky Nickelodeon decided to release the final season at all. Seasons 2 had significantly lower ratings than season 1 and there was virtually no advertising for Season 3, which aired earlier this year. Unless you watched Nick.com you probably didn’t even know Season 4 was online only.

Now let’s talk about the Season itself. The theme this time is Balance and if you thought Season 3’s ending was pretty dark, Season 4 takes kicks it up even further. Looking back, it’s easy to make the arguement LoK’s ratings nosedived because many of the things touched on have an older audience in mind. Can’t be helped given Korra was older than Aang when her legend began. Ah, well. Moving on.

The season opens with hints of the eventual showdown between Crown Prince Wu of the Earth Kingdom and The Great Unifier Kuvira. Kuvira was introduced in Season 3 as Su Beifong’s (reminder: She’s Chief Lin Beifong’s younger sister and daughter of Legendary Earthbender Toph Beifong of the original Team Avatar) number 2 and was tasked with safeguarding the Earth Kingdom until Prince Wu was old enough to take the throne. In reality, Kuvira has been conquering Earth Kingdom Provices over the last 3 years one by one, forming an Earth Empire. At Prince Wu’s coronation in Republic City, Kuvira refuses to relinquesh the power given to her by Republic City and the Four Nations and makes her intentions clear: She will eliminate the old Earth Kingdom power structure and unite everyone under her banner.

Now let’s switch to Korra for a bit. The wounds inflicted on Korra were mental and emotional as well as physical. Not only did she lose the use of her legs but she also lost the ability to enter the Spirit World. A chance meeting with Toph in the Swamplands helps her regain her confidence. Meeting Zaheer in prison (with his hair and beard now grown back) gives her the closure she needed to move on fron her near-death experience.

With Korra back in action, the battle against Kuvira’s Earth Empire is an uphill battle from beginning to end. The conflict is personal for the Beifong family: Bataar Jr. is Kuvira’s second and with the unwhitting assistence of Varrick, Bolin and Zhu Li he makes a giant planinum Mecha with an extreme destructive Spirit Weapon attached to the right arm. Alliegeances are tested as Bolin and Varrick realize Kuvira must be stopped. When Kuvira captures Su and her brothers, Opal enlists the aid Korra, Bolin, Lin and her legendary grandmother Toph to launch a daring rescue deep in enemy territory. 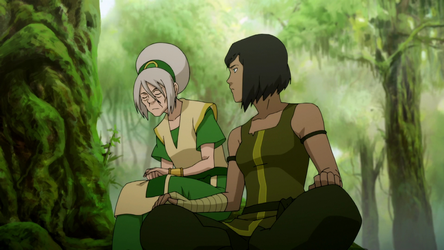 Toph’s final line sums up The Legend of Korra pretty well: “The old folks need to step back and leave the fighting to the younger ones.” While yes Toph, Katara and Zuko have all appeared in LoK, when it came to the major fighting they left it to the new Team Avatar. Although it’s not actually said it’s likely Sokka died a few years before LoK began. We already know Aang died at age 40 or rather 140. 100 years locked in the the Avatar State severely shortened his lifespan so…yeah.

The final episode ends similar to Season 3: Kuvira doesn’t die but the final victory goes to Korra. Unlike with Zaheer, Kuvira realizes the error of her ways and surrenders. That is, after Korra shuts down the Spirit Weapon she unleashed upon Republic City and created a new Spirit Portal into the Spirit World.

Now let’s go back to the “other reason” I hinted at above. Now, unlike Aang Korra is a teenager. That said, she had a romantic relationship with Mako in Season 1 and some of Season 2 before having not one but two messy breakups with Mako (the second due to her temorary memory loss in Season 3). Then again, it’s also true Mako also dated Asami and later broke up with her as well.

Throughout the series, fan pairings involving Korra and Asami ran rampant after in Seasons 2 and 3 after several scenes where the care expressed by the two for each other seemed to go beyond friendship. Until now, it was mere fan speculation Korra and Asami would become Nickelodeon’s first same-sex couple.

The final moments of the finale made it official.

Seeing as it was the finale they couldn’t exactly NOT air it and due to the short time between when  seasons 3 finished and season 4 was scheduled to begin,  Nickelodeon had to decide weather to air it on TV or make it a digital-only release. It would have been more powerful if the season was aired on TV (and I’m hoping it is aired on TV at a later time) but at least they released it despite the low ratings.

It’s easy to now say “the signs were there” now that Korrasami is official but honestly, I was genuinely surprised and impressed. After both Korra and Asami’s respective break-ups with Mako I thought for sure all three of them were done with romance for a while. Ah, well. Major props to Nick for having the guts to greenlight the same-sex relationship. I think if it was revealed later by Michael Dante DiMartino and Bryan Konietzko (the creators of both ATLA and LoK) Nick made them change the ending, there would have been outrage and accusations of censorship.

While it’s likely the decision to introduce Korra and Asami as a couple has no political agenda attached to it, I’m sure some there are some on the other side who won’t see it that way. Hopefully, Nick is prepared for the fight to come. The fans certainly are.

It did its job of continuing the story of the Avatar as well as shedding some light on the origins of The Avatar (Avatar Wan). While it may not have enjoyed the same popularity as Avatar: The Last Airbender, history will redeem it as a wonderful continuation of what’s considered by many to be the the greatest Nicktoon (ATLA) of all time.

As I mentioned in my post about Season 3 a few months back, the next element in the cycle is Earth. If Michael and Bryan decide to give us a new Avatar, they will hail from the new Earth Republic. If they chose to bring back the Korra-era team Avatar (except Korra herself since she’ll be dead) I will be interested in seeing how senior they’ll be. Will Tenzin’s kids play a role? Korra and Asami’s children? What about the Air Nation? The potential for some great storylines is definitely there. Weather the Earth Avatar’s Legend will span all three (or four!) seasons like Aang’s or be a season long like Korra’s remains to be seen. In LoK, there was more of a focus on one person threatening the world (Amon, Zaheer, Kuvira and Unalaq) as opposed to a whole nation (The Fire Nation in ATLA). 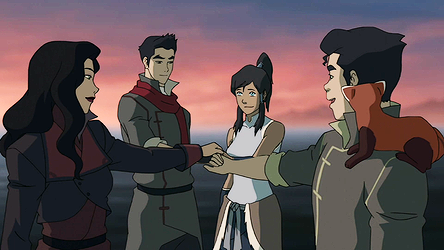