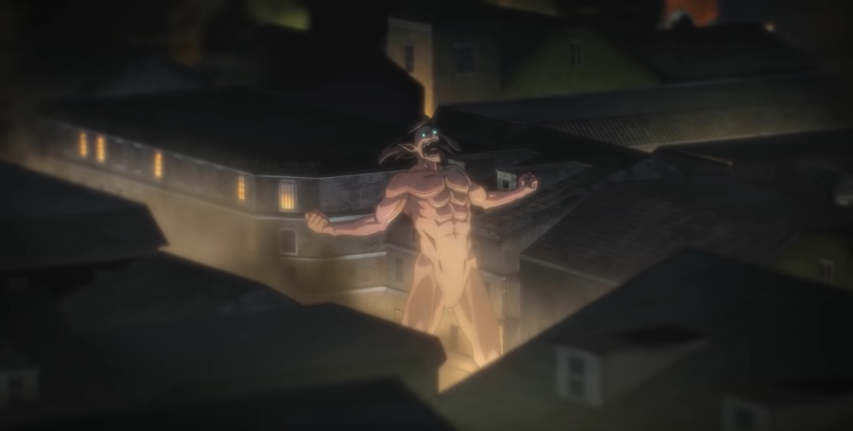 Episode 66 not only had non-stop action from start to finish but it left you wanting episode 67 NOW. Episode 65 ended with The War Hammer Titan seemingly forcing Eren into a stalemate. Episode 66 makes it clear that this is NOT the same Eren Jaeger you knew from the end of Season 1. This Eren is older and much more calculating than the one we knew at the beginning of Season 3.

When the Beast, Cart and Jaw Titans enter the battle, it looks like the tables have been turned on Eren and the Survey Corps. The Marleyian Forces are shocked and horrified to see the Survey Corps, which has been hunting Titans on Paradis Island for generations fearlessly taking on their Titans directly. Levi gives a long-owed receipt to the Beast Titan, dropping him like a bad habit out of nowhere. Jean and Sasha pin down the Cart Titan and she ends up being severely injured.

Then, our boy Armin debutes the Colossal Titan with a bang. Literally.

His line after emerging from the Titan form he took from Bertoldt at the end of Season 3 sums it up: “Is this how it felt for you, Bertoldt?” For those who need a reminder, when the Colossal Titan transforms it’s basically a nuclear explosion that gets set off. This is why Armin transformed off the cost on a raft–a transformation that wiped out the Marleyan Fleet rushing to provide backup–because if he didn’t, he probably would’ve instantly killed thousands of people in the city.

He didn’t do anything beyond that and he didn’t need to. The Marleyan Army now knows Paradis Island has two Titans and they know how to use them. Commander Hange later tells Armin he seems to have become more like her predecessor, Erwin Smith. He shrugs it off, saying he hopes to be a little like their former leader. Meanwhile, Eren patiently tries everything he can think of to take the War Hammer. The owner of the War Hammer crystallized herself like Annie, the Female Titan did.

Prior to Armin’s entrance, the Marleyan Army was sure they had Eren cornered. After his arrival, this gve Eren the space to focus on taking the War Hammer’s power. “If you had anything left, you would have done something by now.” he remarks before freeing himself and transforming again. “Me, on the other hand…I’ve got plenty of strength left.” When the Jaw Titan breaches his own Hardening, Eren figures it out: He grabs the Jaw Titan, tears off his limbs and then uses the Jaw Titan as a giant nutcracker above his head to devour the War Hammer Titan’s powers. He gets interrupted before he can finish off the Jaw Titan by the arrival of Reiner, the Armored Titan.

The preview for Episode 67 announces the Armor Titan falls which is a fair assumption: Reiner told Eren he basically had a death wish so…yeah. Assuming Eren takes the Armor Titan’s power next, he will have four Titan powers (Founder, Attack, War Hammer and Armor). The status of the Cart and Jaw Titans is currently unknown but both are critically injured. We also do not have confirmation Levi actually killed Zeke yet. Excluding Armin (Colossal) and Annie (Female), all of the Nine Titans are now accounted for. All but the Female Titan, who is crystallized are in the same place right now too. Things should get real interesting.