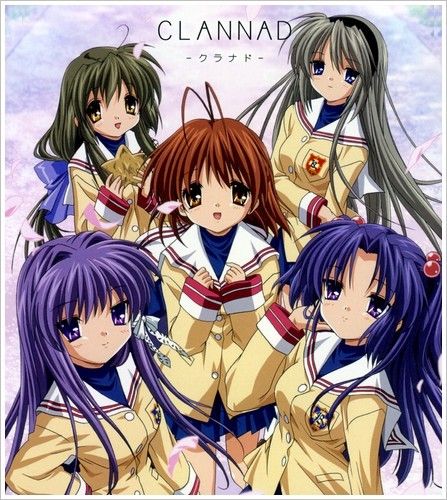 To say Clannad is my favroite Anime of all time is putting it mildly. I don’t just consider it an outstanding Anime. It’s an experience. Much of the following review is the one I posted on the forums last year with a few updates here and there. 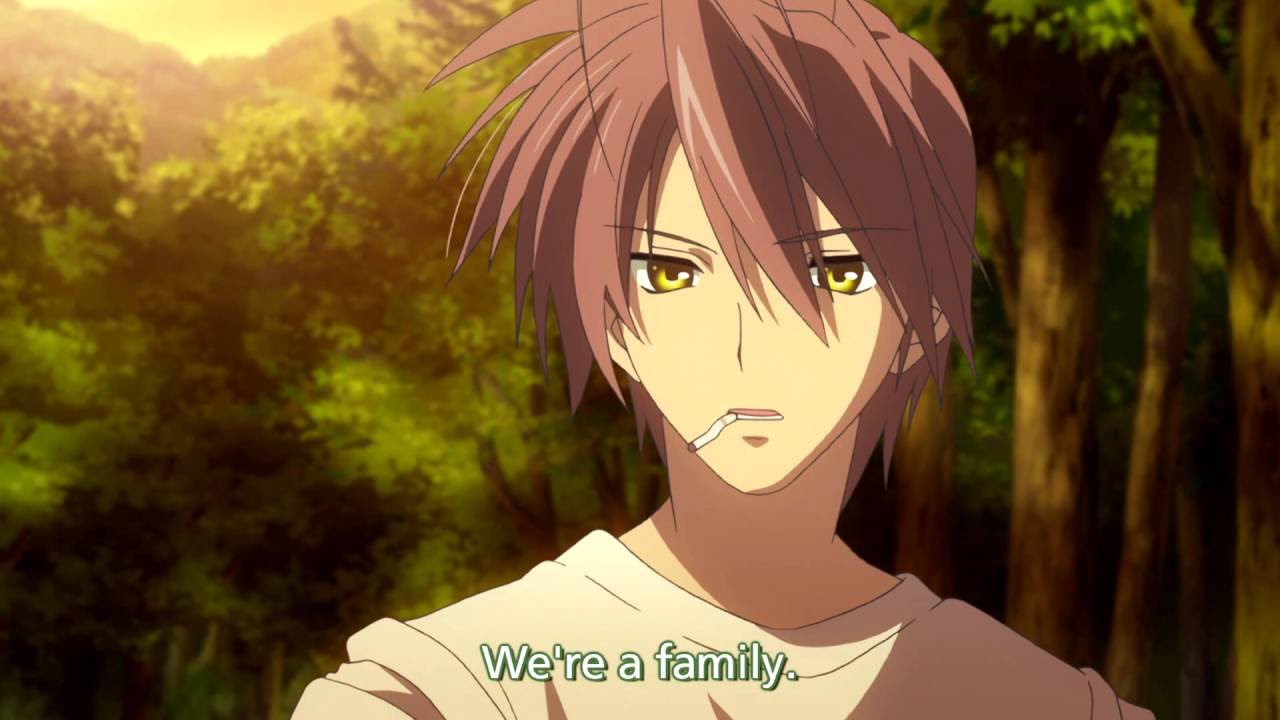 Before I continue, I feel the need to say I am 28 years old. I have watched nearly 25 years worth of TV and Movies. Of them, only Clannad has touched every one of my emotions to the very core. I go well out of my way to suppress my emotions both around people and when I’m enjoying entertainment (TV, Video Games, Music, Books, etc.) because of life experiences. Before I watched Clannad in its entirely, I’ve only felt this way two other times. The first was when I worked for City Year 8 years ago. The other…was the night before I had open heart surgery 18 years ago. The former was an emotional roller coaster and in the case of the latter…I still can’t put it into words 18 years later.

I dare say Clannad topped both of them as life changing experiences. The things I felt watching the struggles of Tomoya, Nagisa and their friends in Clannad were far outside the scope of anything I’d ever felt before. Even so, I found myself watching all 24 episodes of the first season in succession on Netflix. I saw a little of myself in the entire cast. There were times when I was confused about how the Alternate Universe storyline fit into story until I watched After Story. Then it all came together.

Unlike most other mediums that like to surgarcoat reality to make the viewer feel good or eventually give them a happy ending, Clannad does the exact opposite. Unlike Elfen Lied (another great Anime I reccommend watching but it’s strictly 18+) it does the job without fan service, over-the-top cliches or exaggerated personalities. The entire cast has major baggage: Tomoya was raised by a father with substance abuse problems, Nagisa missed graduating with her friends due to her debilitating medical condition, Kotomi’s suppressed memories from her childhood return…I could go on and on.

Even so, Clannad (and After Story) somehow comes up with a way to make you genunely care about the characters. When they’re happy, you feel happy. When they experience heartache, you feel absolutely devistated. One review I read for After Story at Amazon.com compared it to many of history’s greatest novels. This is just my opinion of course but I believe Clannad surpasses all of them. The storytelling and the characters are 100% genuine. With a few obvious exceptions, everything that happens in Clannad everyone can relate to.

Life is hard. Life can be unfair. Sometimes people who’ve had the worst things happen to them can lose it all. Even worse, the one thing you’ve wished for more than anything in your entire life can be taken from you. All of these things happened to Tomoya and Nagisa both when they were in High School and when they were married and started a family. Even after the credits roll after Episode 25 of After Story, you’ll feel like you’ve known them your entire life.

After Story actually has three separate storylines towards the end. If you’re reading this on my forum, the next two paragraphs are hidden unless you want it spoiled for you. For everyone else, don’t peek unless you don’t mind spoilers. The spoilers are pretty big so…yeah. In all three cases, other possible outcomes for Tomoya and Nagisa are explored both in Other story Episodes and in the video games. Nothing out of character but they’re all believable. 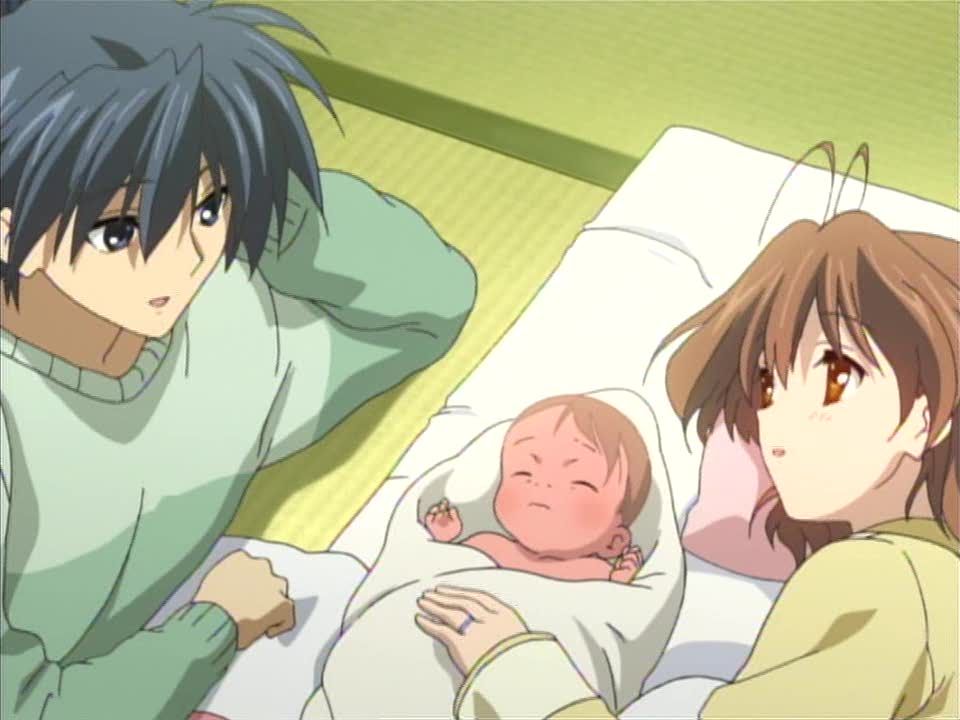 Originally, Nagisa dies giving birth to Ushio. Tomoya is devistated and Ushio is raised for the next five years by Akio and Senae (Nagisa’s parents). Senae and Akio arrange for Tomoya and five-year old Ushio (who looks just like her mother. She appears briefly in the opening and ending credits though her face is not shown either time) to spend time together. While on a trip together Tomoyo meets his grandmother, who tells him the truth about his father. I like to say Tomoya decides not to allow history to repeat itself and decides to raise Ushio on his own. Just when things start looking up for father and daughter, the same illness that ultimately took Nagisa’s life suddenly appears in Ushio. While trying to grant her wish to go on another trip, Ushio dies in his arms.

This is where the secondary storyline kicks in. In Season 1 Nagisa and Kotomi talk about an alternate universe and how it may effect their world. Nagisa believes that there are times when the power from the other world can grant the wish of someone in their world (which is actually demonstrated through Fuko in Season 1). When Ushio dies Tomoyo wishes he and Nagisa never met in Episode 1 of Season 1, which is explored in one episode of After Story. At the end of that episode Tomoyo takes it back and expresses his true wish for he and Nagisa to raise Ushio together, which is instantly granted. The clock is turned back to Ushio’s birth. Nagisa passes out momentarily but wakes up a short time later and thus the storyline changes to this new one. 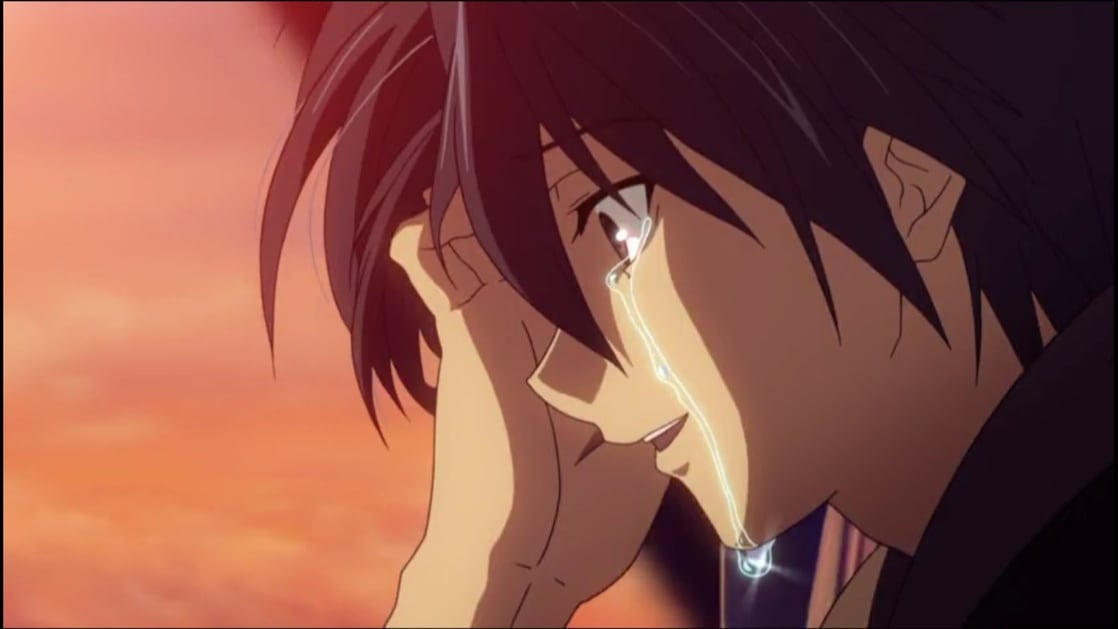 When Tomoyo wishes he and Nagisa never spoke the day they met, we’re shown what would have happened if he didn’t speak to her that day. Spoilers prevent me from saying more than that but it’s another example of how Clannad shows how even simply introducing yourself to someone can change the life of another. In another alternate reality explored, Kyou falls in love with Tomoyo after a prank gone bad. Tomoyo ends up dating her sister Yu until Kyu finally confesses. The third and final alternate reality–which ended up getting a video game that takes it further–explores Tomoya and Tomoyo as a couple.

I feel the need to explain Fuko a bit weather or not you read the two paragraphs above the peceeding one. As originally explained, Fuko was in a coma the whole time she first met the cast. The only explaination I can think of is the Alternate Reality. After her sister was married (who was unable to “see” Fuko herself during the first half of Season 1), everyone’s memories of Fuko began to disappear. It’s revealed shortly after everyone forgets about her Fuko wakes up from her coma. To keep things consistent, when Fuko is introduced for real she has no memory of her interactions with the other cast. My theory is the Fuko they met in Season 1 was Fuko as she was had she been well and able to go to school with them. After her sister married this “Phantom” no longer had a purpose and left.

There are MANY life lessons one can take from Clannad and After Story. I believe the main theme was no matter what may happen in life, the dreams of your parents live on through you. Just as parents feel their greatest achievement in life is being your parent, your greatest achievement will be carrying on the legacy they and their descendants started. What that’s supposed to mean exactly I’ll leave to you. Of course it should come as no surprise given Clannad is Gaelic for Clan, which itself is another word for “Family”. A Big Dango Family. … Oh and YES, there will be Fan Fiction from me on Clannad. One in progress at Fan Fiction.net you might wanna check out is Clannad: A Wonderful Life. All who’ve read it call it the After Story to Clannad After Story. It picks up a year after the events of the Anime. The Okazaki Family is expecting a new baby, Youhei and Tomoyo are getting married, Kotmomi creates a new form of Energy and Fuko does what Fuko does best. Just check it out for yourself ^_^