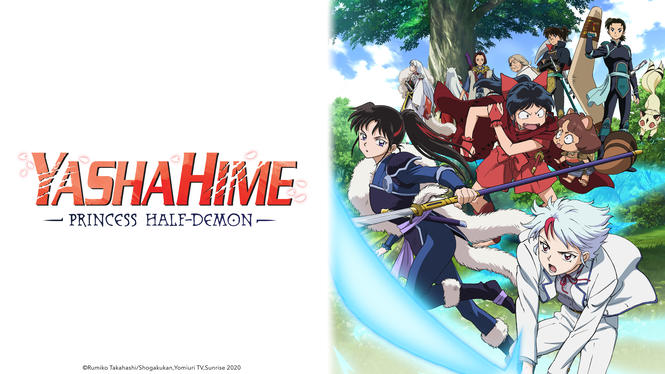 If you haven’t been following the sequel to the legendary Manga turned Anime Inuyasha because you don’t like sequels to anime you like…your loss. I’m just gonna put it like that. For everyone else, keep reading. Fair warning, there be MAJOR plot spoilers for both Inuyasha and Yasha-Hime: Princess Half Demon in this article. If you’re not caught up to Episode 15 of the latter Anime, stop here!

Ok so as the name of the new series reveals, the focus of this story is on a trio of Half-Demons who are the daughters of Inuyasha and Kagome (Moroha) as well as Sesshomaru and Rin (Towa and Setsuna) respectively. The twins are cousins to Moroha due to their fathers being brothers on that note. As was revealed in Episode 1, Towa and Setsuna were split up as children during a forest fire. Towa ended up being raised by Kagome’s brother in the Modern Era while Setsuna would be raised by Sango and trained as a Demon Slayer in the Feudal Era. As was revealed in Episode 15, Moroha was raised by the Wolf Demon Tribe, which is led by Koga. For those who don’t remember him, he was Inuyasha’s rival in the original series. It’s likely she learned how to use Divine Power from Kaede as so far she’s demonstrated the ability to use Sacred Arrows and erect barriers. It certainly helps her mother Kagome is a priestess.

Anyway prior to Episode 15, one of the biggest mysteries of the series to that point is “Whatever happened to Sesshomaru, Inuyasha and Kagome?” followed by the obvious “Who is Towa and Sesshomaru’s mother?” For the second question, if you guessed Rin you would be correct. Rin was the orphaned human girl who accompanied Sesshomaru during the original series. Kagome, who is pregnant with Moroha at the time is present for the birth of Towa and Setsuna.

As the first question, Episode 15 explains this part. Prior to this, Sesshomaru is briefly seen when the trio journey to the Feudal Era from the Modern Era. They pass through the Tree of Ages, which played a minor role in the original series. If you’ve been following the series up to now, you will know about Kirinmaru. While Inuyasha and Sesshomaru’s father Inutaisho–known as the Great Dog Demon of the West–ruled Western Japan, his counterpart Kirinamaru–originally from Mainland China–ruled Eastern Japan.

500 years before the original series, the Great Demons teamed up to destroy a comet fragment that would have destroyed Japan. Sometime after that, Kirinmaru went into a long slumber. As anyone who’s watched the series or saw the third Inuyasha movie should know, Inutaisho died saving Inuyasha, who was a newborn at the time and his wife Izayaoi.

The week after Setsuna and Towa were born, the same comet fragments returned but this time Sesshomaru and Inuyasha dealt with it. Sesshomaru is visited by Zero, a mysterious Demon and subordinate under Kirinmaru to warn him about the coming comet fragment. Kagome is tipped off by Riku, who clearly knows more than he was willing to reveal both then and since. As is revealed by Zero, Sesshomaru’s children are in danger along with Inuyasha and Moroha from Kirinmaru simply because they’re Half Demons (Quarter in the case of Moroha).

Zero reveals a prophecy from the Shikon Jewel relevant to him for viewers: At some point in the future, he will be slain by a being that is neither Human or Demon. Apparently, Kirinmaru intially laughed at the idea but that was before Inuyasha came along. It didn’t take him long to realize Half-Demons were was the prophecy was referring to and naturally, he personally hates them as well as humans in general.

Presumably acting on his orders, Zero had Homura set the forest where Towa and Setsuna were hidden. The three would meet in Episode 17 where Homoura would be consumed by his own flames. Sasshomaru’s majordomo Jaken had planned to eventually bring Rin to the place where he sealed the twins. Although Rin lies in suspended animation inside the Tree of Ages, clearly something happened that led to that. We’ll probably find out at a later time but she will be in for a shock when she is reunited with her children.

As for Inuyasha and Kagome. Sango and Miroku finally made their appearance in Episode 13 and as was revealed, Miroku sealed most of Setsuna’s Demon Blood. Shortly after Moroha was born, she was spirited away to the Wolf Demon Tribe which raised her. Joining with Kirinmaru, Sesshomaru used the Black Pearl to seal Inuyasha and Kagome in their father’s resting place, which is in another dimension. Jaken explains to Kirinmaru there may come a time in the future when they will need to Inuyasha and his Medio Zangetsuha. Satisfied with knowing Inuyasha is sealed away, Kirinmaru is ok with it.

It’s fair to say at this point Sesshomaru did all that he did to protect everyone from Kirinmaru. It’s also likely he figured out Towa, Setsuna and Moroha will be needed to take down Kirinmaru one day. He clearly knows all three are making names for themselves right now but is likely keeping his distance for their own good. One bit of plot that appears subtle in Episode 15 that’s easy to miss is the fact Zero can find people in their dreams. As it happens, Setsuna’s memories were taken by a Dream Butterfly and for the same reason, she is unable to sleep. Clearly there is a connection there.

Riku clearly knows a lot more than he’s ready to reveal. We know he’s collecting Rainbow Pearls but at the same time he’s clearly not aligned with Kirinmaru. This is speculation on my part but I think he may be planning to make a new Shikon Jewel. He clearly knows about what happened to the original after it was restored and though he’s content to let the girls keep their pearls for now, no doubt he’ll make a move for them at some point down the road.

You can catch new episodes of Yasha-Hime: Princess Half-Demon on Crunchyroll Saturdays at 5AM EST Subbed. The English Dub is up to Episode 9 as of this week on that note.