According to this article I found on Crunchyroll, Season 2 is currently in development. The news comes as no surprise to me. If you remember this blog post I wrote a few weeks ago, I went over the storyline that continues where the Anime leaves off. If you’ve only seen the Anime, you’re in for something special. I’ve been reading the Manga and I can tell you, things get interesting!

In related news, the cast of the live action movie has been released. The entire cast is Japanese (see above). According to the story, Mikasa Ackerman is believed to be the last Asian person left in world.  Japanese fans released a poster of who they think should be the cast after the official cast list was released:

Of course, one can EASILY make the arguement US Studios are guilty of doing the same thing with their live action film adaptations of Video Games, Books and Cartoons. Still though, the fan-made choices–including Santa Titan at the end–are spot on XD 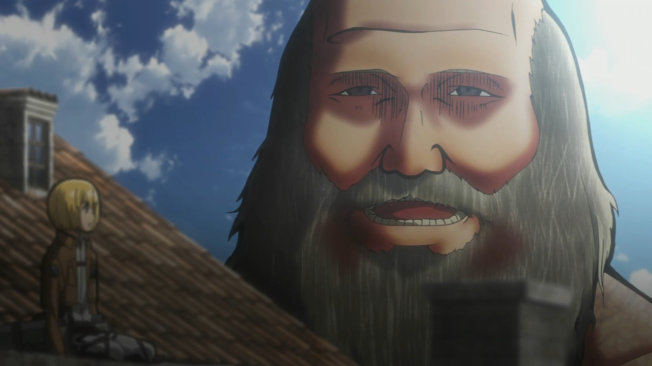 …Speaking of which, it would be kinda awesome if they came out with a Christmas Special for this epic moment in AoT history XD

What alot of people in the “Subs only” crowd don’t get is there ARE alot of people who like English Dubs. Attack on Titan was the first Anime I watched subbed in its entirety around this time last year. It was awesome. That said, the dub just ran its finale on Toonami this past weekend.  It was awesome.

On the one hand yes, it does cost (alot of) money for an Anime (or Video Game) to be dubbed from Japanese. You have to hire a cast of voice actors, linguists and localization specialists to make sure the dub both makes sense to the intended audience but still stays true to the source material.

On the other hand, opinions on English dubbing in particular have dramatically shifted compared to 16 years ago. In the late 1990s, Anime wasn’t as mainstream as it is today. What little Anime did make it to the West was heavily censored (Dragonball Z and Sailor Moon) and “Americanized” (Yu-Gi-Oh) to appeal to Western audiences.

You wouldn’t be wrong if you said the white-washing of Anime at that time was what turned Anime fans off to English Dubs in general. This is one of the two theories I consider acceptible for being anti-dub (the other being you are fluent in Japanese). This great disservice to Anime was ill-timed, as Cartoon Network launched a dedicated Anime block (first weekday afternoons but later moved to Saturdays starting at Midnight) in an effort to cater to hardcore Anime fans.

That period from 2002 to 2007 was like a golden age for Anime Fans in North America. For the first time ever, Anime currently airing in Japan was being brought to the U.S. so that fans on both sides of the Pacific could both enjoy it together. Funimation really deserves alot of the credit for that. They’ve been dubbing Anime since the mid-90s and didn’t deserve the hate they got back then just for trying. Yes, they were part of the problem at the time but later they became part of the solution.

I’ve been going to Anime Boston for 5 years now and longtime voice actor Greg Ayers is staple every year. One thing he and other English VAs have in common is they don’t do what they do for the money. They do it because they love what they do and they understand how important their role in making Anime accessible to many people are. They also know that there are alot of folks who may consider pursuing a career in voice acting themselves and like it or not, they’re role models in that regard.

Some idiots like to throw around phrases like “Anyone can do voice acting” when they know this is far from true. It takes quite a bit of skill and hard work just to become an American voice actor. For those who dub, alot of good luck is needed as well. I believe I mentioned this after AB2013: Those who dub Anime be they union or non-union will always makes far less than their counterparts who do American cartoons. Marketing has alot to do with it as does the fact they’re subcontracted for their work.

A round of applause is in order.

Not since Dragonball Z and Inuyasha has an anime that went on for years enjoyed such great success and had such a devoted fan following from beginning to start. Even though the Manga has four additional story Arcs, this was a great place to end the Anime.

As I understand it, Tite Kubo (Bleach’s creator) wanted the Anime to be wrapped up a few arcs sooner than originally planned to give the fans closure. The Anime was being produced parellel to the Manga and there were more than a few instances where filler arcs (Bount, Swords Beasts and Amagai for example) had to be made to allow time for the next canon arc to be written.

Bleach has quite an unforgettable cast of characters and scores of memorable battles. Bleach has more than

earned its place alongside Dragonball Z, Fullmetal Alchemist Brotherhood and Naruto as one of the greatest Animes of all time. Bleach also spawned four movies: Memories of Nobody (set sometime after Soul Society Arc), Diamond Dust Rebellion (Set during the Visords Arc), Fade to Black (Set before the Hueco Mundo Arc) and Hell Verse (Set at the end of the Hueco Mundo Arc). Each one is set during a story arc for the sake of placing a timeline.

With the sun set on Bleach, there’s a pretty good chance it will live on in reruns just like Inuyasha. With Dragonball Z Kai Uncut set to run in Bleach’s midnight slot next week on Toonami, anything’s possible ^_^