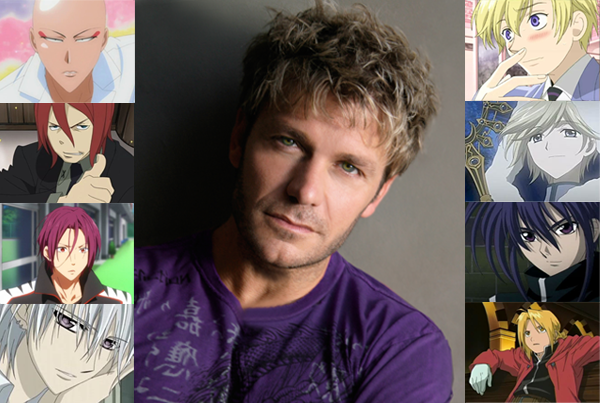 …I do feel like at this point, it’s safe to say we may be seeing the beginning of the end of Vic Mignogna’s professional career as an actor and voice actor.

Anime News Network’s January 30 article (a new window will open) sums up the situation better than I ever could and I urge you to read it if you haven’t yet. As noted in the article, they like everyone else was hesitant to run the story simply because of the man involved: Legendary English voice actor Vic Mignogna. Above are pics of him with 8 of his most known roles. He voiced Broly in the Dragon Ball Super: Broly movie as well.

It’s pretty obvious from reading the article much care was taken by the author to keep their emotions in check and not appear to favor one side over the other. Clearly it was a story that they had been working on for years at least with the sources vetted for accuracy. While most of the allegations come from congoers and all of them come years after the fact, some have come from fellow voice actors as well. The allegations come from men as well as women.

Anime News Network provided an update here in which it was announced Vic has been removed from RWBY. The article also notes Vic’s appearances at 13 convention appearances were cancelled but he is still booked for five. Over the years, more and more conventions have been quietly blacklisting him because of the unsolicited inappropriate physical contact alleged by congoers backed by witnesses.

Speaking of conventions. I made a thread on Anime Boston’s forums last week requesting comment. Chris O’Donnell, who is Anime Boston’s Director of Public Relations responded shortly after I made the thread:

“Mr. Mignonga has not been a Guest of Honor at Anime Boston since 2006. None of the reported allegations, as far as we are aware, occurred at Anime Boston. As such, we have no comment regarding these reports at this time.”

For reasons that should be obvious, he is not at liberty to say any more than that. Anime Boston does have actual experience in the area of invited Guests of Honor being the subject of allegations like this. A few years ago, longtime convention guest and voice actor Tom Wayland sexually assaulted a female convention staff member. The incident reportedly happened in the Sheraton Hotel, which is one of the venues used by the convention and it happened during the weekend-long event. He was a convention favorite alongside fellow longtime guest Greg Ayers and often brought his kids with him to the convention.

The New England Anime Society (NEAS), which is the parent company of Anime Boston banned him for life and the victim took him to court. That was the incident that made congoers realize they needed to be mindful of inappropriate conduct not just from other congoers or members of the public but people from the industry as well. NEAS set the standard for how all conventions should approach allegations involving people from the industry and public figures. You certainly don’t ignore or silence those who come forward.

Getting back to Vic’s indescretions. He did put out a public statement on January 21 which Anime News Network included in the first link from above and it is mostly in reaction to a Twitter thread from January 16. Here it is in full: Most of it is the usual victim blaming and “They just want to ruin me” drivel you would come to expect from a public figure. In response to the allegations of inappropriate physical contact with Congoers and fellow industry members, he basically waves it off as “That’s how I interact with my family” and that’s the problem. You’re not meeting with family. You are meeting with members of the general public. Yes they’re fans of your work but that doesn’t give you a free pass to do whatever you want. He does say at the end he will change how he interacts from now on because of how much attention it’s been getting lately first and more likely his bottom line is being effected second. He let the fame go to his head in short.

This past weekend, Vic issued a public statement at a convention and was likely in reaction to the ANN article:

This should have come 10+ years ago.

For those who don’t know, he was approached about the allegations MANY TIMES by people in the industry. Fellow voice actress Monica Rial mentioned via Twitter she confronted him about it twice and complained to others higher up and she was silenced. Why was her voice, those involved and many others silenced or ignored?

Because it’s Vic Mignogna that’s why.

It’s clear in the video he finally got it and owns up to how he made so many people feel for almost 20 years. I don’t doubt the sincerity in the video at all and it’s clear he knows he hurt alot of people and let a lot of people down. I just hope he knows there is no one thing he could do that would make everything right.

I doubt everyone will forgive him but seeing as he did finally own it and apologized, his longtime fan club the Risembool Rangers needs to follow his lead and apologize for their part in helping to surpress the voices of those who spoke up over the years. Blind faith is no faith at all. No one is perfect and he has shown remorse for how he made others feel. His willingness do that shows me he is truly sorry. The thing those who insist on defending him no matter what need to prepare themselves for is more coming forward as well as civil lawsuits against him. Most likely he will settle as many of them out of court as possible. No one is perfect and when the people we look up to make mistakes, they should be held accountable. More so when they’re public figures.

It is important to know that there are no winners in a situation like this.

Vic’s reputation is permanently tarnished, alot of people who violated and many more people were silenced. Hopefully everyone involved can find peace. I don’t think this will destroy Vic professionally and more so now that he’s publicly apologized and owned it. I do think he should cancel his 5 remaining convention appearances for the year and take some time away from voice work though. He can make a comeback but first he should step away for a bit.